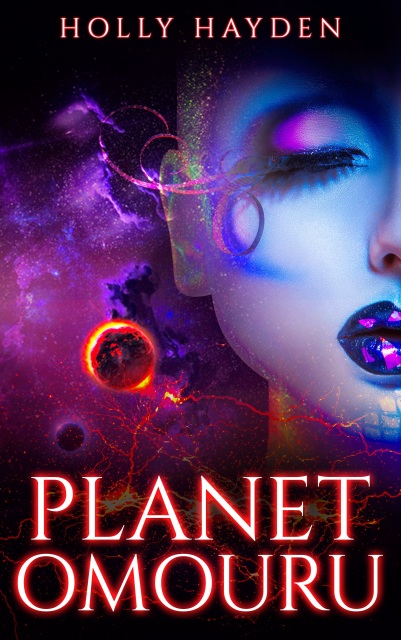 A young man named Dylan gets sold as a slave to the Planet Omouru. He gets transported to a hedonistic land and culture to become the queen's slave. Dylan must abide by the culture and rules if he is to survive. The ways of Planet Omouru seduces his soul and he finds himself attracted to the Queen Omua who excites it. Dylan must fulfill his role to the queen.

The guards went through the hallway and looked up to see to see reddish and brown archways with womanly figures exposed through the artwork. Some guards stood off to the side wearing gold plated shields and spears in their hands. The other guards opened the door and a light aroma wafted into the man’s senses. He closed his eyes as the light pierced through him. He exhaled then turned his head as he gazed upon a marble looking floor with dazzled artwork imprinted throughout of purple and blue. Specks of gold and auburn shined throughout. Many women stood off to the side and others sat in chairs. Large feather-like fans over seven feet were fanned back and forth. Some women and men wore jewelry headgear and piercings all over their body. The creatures in the room continued to gaze at the man who was walking with the guards.

Whispers were heard all around as they continued to walk toward the front. One of the male guards pushed the man to the floor then looked up to see fans covering over some large steps. He peeked up to see reddish steps arched with brown clay. His eyes looked down as afraid then saw bare feet approach coming down the steps. An angelic voice brought him out of his fear.

“Welcome, Dylan…” the voice entranced him.

He observed the onlooker and sighed as she was bald like the others, but had blueish freckled lips, purplish, citrine, blue and cherry infused into her skin with layers. Her skin was lush of colors and was flawless. He speculated what this creature was. She had an hourglass figure with large breasts. The woman had long eyelashes and stood tall and slender. She grinned looking at him the kneeled down to stare into his eyes. Her eyes were twin colors of violet and cerulean that blended with each other. Her eyes spoke of the galaxy inside of them. Dylan felt himself lost as he gazed upon her.

Dylan was lost to her focus and charm, “how do you know my name?”

“Because I can read your mind,” she giggled somewhat saying inside of his mind. “I’m Omua, I am the leader of this Planet. You are my slave.”

Dylan’s eyes grew big as he gradually stood up and tried to catch his breath. Bangles adorned her ankles as she walked back up the steps. The other men and women gazed at the man wondering what. Dylan gazed up at the Omua with lustful eyes, for he truly noticed her clothing barely covering over her body. A shiny wrap and gold plates covered over her breasts. A skirt slid all the way down her body as she moved. There were slits on the sides. She turned back on her molded stone throne. She moved her feet to the side and clapped her hands to the guards. The pushed him to the steps and he glanced up to see Omua beckon him to come forward. Dylan slowly walked up the steps.

He groaned for now he was a slave to a queen of this planet. Dylan would have to be by her side forever and if she could read his mind, he couldn’t ever escape. Soft music played, then he sat next to her.

Dancers came out and moved about on floors. Other guests in the room grinned and clapped as the dancers continued to move. He turned to her and peered around for these people were strange to him. She turned her head to him and giggled.

“I picked you out of the others for a special reason, Dylan. Don’t be afraid of me. I fetched a good price for you. Planet Omouru is your home now. I am the queen of this place. You will never have to fear what is to come, but never cross me.” Omua stated.