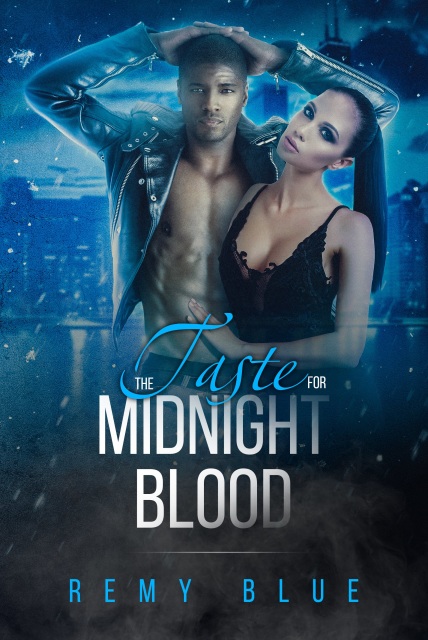 The Taste For Midnight Blood - Kindle

A young African man, named Oni, lives in Chicago and works as psychic for the Chicago Police Department alongside his detective friend, Jackson. He comes from an deeply rooted traditional and family orientated West African family. As his family leaves the city to go abroad, Oni is set to take care of his younger sister, Zula who attends the local university.  At the same time, brutal murders appear all over Chicago, as Oni and Jackson are set to find them out. Soon after, Oni meets a young woman who attends Zula's university named Yura.

Oni and Yura connect with one another as their family, customs and traditions clash with them, for they wish to be free at times. Both find a grounding place and have a mutual fast attraction to one another. Dark yearnings and secrets begin to spill from the case as it becomes clearer there is darker killer in Chicago with new hunting grounds. With no suspects, the FBI sends an agent to deal with the case. Zula tries to piece who the killer is, yet can she, for the killer is closer than she thinks. Jackson must stay close to the FBI agent as it would conflict with his truce with Oni's family's disturbing secret. Oni and Yura become closer and fall in love as the all events unfold around the murders and who is the beast trolling Chicago for new blood.

Jackson sat at the dinner table. He tapped his fingers against the table. He groaned and checked the time on his phone. He sneered as the door opened up with Oni walking in. Oni moseyed over to Jackson and sat down in the booth.

“I had to do other things, Jackson,” Oni rolled his eyes.

Jackson looked all around and leaned in more. “Listen, I got more dead bodies on my hand. We need to crack this case before the FBI get involved. We have to have leads, Oni. I don’t want the FBI on my block. I got this with you.”

A waitress treaded by and placed a few glasses of water on the table. She left and Oni grimaced at Jackson. He looked around and pulled out the file to show it to Oni. He observed the dismembered parts and blinked his eyes. He peeked over at the pictures seeing a pattern. Oni gasped as he looked up at Jackson.

“Jackson, this isn’t a ritual, or anything else. This is an animal. There’s a creature doing this,” Oni said lowly.

“What do you mean?” Jackson asked confused.

Oni pointed to the ripped markings and gashes in the body. “Look an animal did this, but the mouth bite is large. There is something supernatural about this and it’s a creature. I don’t know which one it is. We will need to find out a little more.”

Jackson leaned back and sighed heavily. He pulled out a canteen from his pocket and drank from it. He exhaled deeply, because the last thing he needed from to tell the chief was that it was a supernatural creature running around Chicago. He didn’t want to deal with the backlash. Jackson speculated how he was going to tell the chief.

“Oni, only few a people know about your true origin. I only allowed you on the police force because I saw that a great asset. Most people would be fearful, but you came to me with respect and told me. I trust you for that.” Jackson looked at his friend.

“You’re the first real friend, I have. That means a lot to me. My family doesn’t let many outsiders into the family. I stay in Chicago because friendship is more important to me than traveling the world.” Oni said deliberately.

“I dig our friendship because no one can understand me or my family,” Oni took the glass of water and began to drink.

Jackson put his canteen back into his pocket, “we got a pact for doing what we do. It’s a bloody world out there, but we do what is necessary to destroy and keep crime off the street. We make things a better world because of it.”

Oni shook his head for Jackson was right, “yeah, bro.”

​
Not Available
Powered by